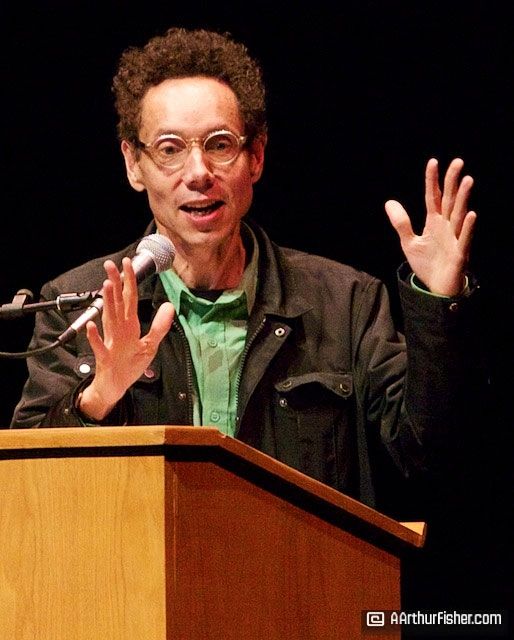 Written by Amy Johnson on 13 April 2014 Posted in Event Reviews.

Malcolm Gladwell on The Virtues of Rebellion

Malcolm Gladwell was happy to be in Santa Barbara. The building next to his apartment in New York had recently been torn down, releasing "hundreds of rats." So he'd spent the last couple of months in his apartment shivering and fending off New York-sized rodents. Southern California was looking pretty good.

Gladwell, the author of five, count 'em five, New York Times bestselling books, spoke at the Arlington on Friday, April 11, as part of UCSB's excellent Arts & Lectures series. His current bestseller is David and Goliath: Underdogs, Misfits, and the Art of Battling Giants, about our perception of advantages and disadvantages—a topic that also runs through his earlier book Outliers.

At the beginning of his talk, he explained that the motivating question behind David and Goliath was, "Why do people choose to rebel?" One version of the answer to that question, according to Gladwell, is the story of Alva Vanderbilt, née Smith, and he spent most of his time telling her story. Gladwell is extraordinarily good at telling stories. This is the guy you want at your dinner party; this is the man with whom you want to be stuck in an elevator. He is funny and riveting.

Gladwell explained that scientists have long thought rebellion could be explained by deterrence theory, a sort of risk-benefit analysis in which an individual or group decides that the potential benefits of rebellion outweigh the risks. But Gladwell argues that deterrence theory doesn't really work. He offers the example of a rebellion from the beginning of The Troubles in Northern Ireland. In response to the British military's curfew in Lower Falls, during which they ransacked houses and shot on sight anyone breaking the curfew, thousands of unarmed women from a neighboring town linked arms and walked into Lower Falls, singing "We Shall Overcome," and, according to Gladwell, drove the soldiers out. The risk to those women of being shot and killed was pretty darn high, which, according to deterrence theory, should have meant that protest never happened.

So what does Alva have to do with this story? Alva Vanderbilt became, for Gladwell, one of the most extraordinary radicals of the twentieth century, though there was clearly nothing about her history to suggest such a destiny. The story of how Alva became a radical activist for women's rights was the heart of Gladwell's talk.

Alva Smith was born in Mobile, Alabama, in 1853. She was, according to Gladwell, "a force of nature, an obstreperous, an impossible child." A friend—trying to be kind—described her as looking like a Pekingese. Gladwell suggested that a Pit Bull might have been a better analogy.

Alva decided early on that the thing to do was marry into money, and she set about that task with an enviable determination. She got herself introduced to Willie Vanderbilt, grandson of Cornelius, and then married him. And then she became, as Gladwell put it, "the most conspicuous consumer in the history of conspicuous consumption." He described the various and ostentatious homes she had built, the 285-foot yacht she commissioned and named—what else—the Alva, so conspicuous that it was once mistaken for a destroyer.

When Alva's daughter Consuelo came of age, her mother forced her into a marriage to English royalty, a "cash for class" arrangement not unheard of at the time. Consuelo was not happy in her marriage; neither was Alva happy in hers. Willie has affair after affair. On a trip to Paris to save the marriage, he first runs off with Alva's best friend and then, dropping the friend, takes up with Paris's "most notorious prostitute." Alva is humiliated, but wealthy New York socialites don't divorce. Furthermore, as a woman at that time, in that place, she has few outlets for her considerable energy other than her well-known architectural excesses. Around this low point, Gladwell told the audience, she writes that women are forced to "withdraw into the shadows while the man pays the family respects to the sunshine. Women must get their sunlight by proxy." "It is," said Gladwell, "a moment of transformation." Alva is angry.

She kicks Willie out and divorces him. She is "denounced and ostracized," but "she doesn't flinch. ... Alva doesn't fold in the face of opposition," said Gladwell, because she does not believe that that society's judgment of her is legitimate. Women are second-class citizens—they are not respected and there is a double standard. Alva realizes that without the vote, nothing will change. And so she barges into the suffragette movement and takes over. She pays for the legal defense of women arrested in the garment-workers' strike. During World War I, when other suffragettes are suggesting that it isn't the right time to be loudly dissenting against the system, she insists that it is exactly the right time. Perhaps my favorite detail from her story is that when she dies, all her pallbearers are women.

The Q & A session was vigorous, with most of the questions coming from among the many college students in the audience, one of whom said that Outliers in particular has been deeply influential on his generation. Another young man lifted his shirt to show Gladwell his "ten thousand hours" tattoo. (He didn't show the audience, unfortunately.) An older gent asked about how the legitimacy theory might work in different, more complex contexts like Syria or Ukraine. Gladwell's answers weren't always direct, but they were always genuinely thoughtful. Yours truly asked how he chose his projects. In response he described his current one, about how crime "used to pay," that it used to be that one could move from a criminal family into the middle class. That door, according to some drug dealers he's spent time with, is closed. Gladwell wrapped up with an answer to a question about rebellion, saying, "I thought you went to college to disparage the administration. If college students won't rebel, no one will." Nearly as interesting as Gladwell's talk was the make-up of the audience. There were contingents from Westmont College, which sponsored the talk, UCSB, and SBCC. There were older folks, and even a few quite young folks. Seated in front of me were three generations of a family.

Gladwell has gotten some flak for the "unscientific" nature of his conclusions, but there's no arguing that he is a great raconteur, and that he leaves his audience thinking about the world in a different way from when they came in. As I walked back to my car, I realized the two guys in front of me, who'd been at the talk, were deep in conversation about why young people seem to approach problems differently from older folks. I don't think there's a higher compliment for someone who wants people to find new ways to think about the world around them.

By the way, in case you were worried, it may make you feel better to know that Consuelo also got divorced, and she and her mother repaired their relationship and became quite close.