Beck's Arlington Phase is Where It's At 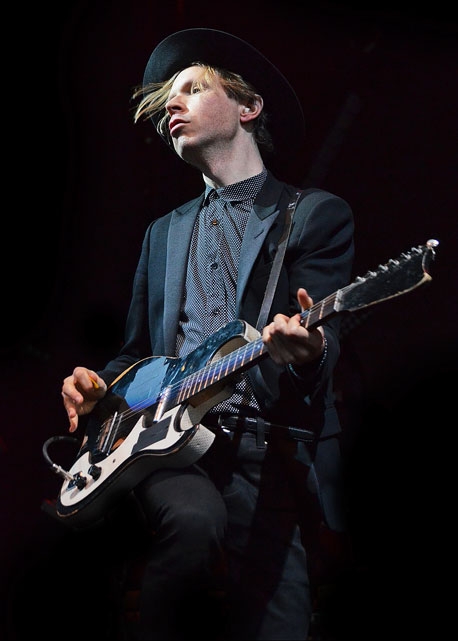 Anyone who listened to music on the radio back in 1994, couldn’t get the smash hit song, Loser, out of their head and the indelible words…”I’m a loser baby, so why don’t you kill me”. Beck burst onto the world stage that year, big time, though he’d been around the music scene since the late 1980’s becoming involved in New York City’s anti-folk movement. Fast forward a few decades and a stack of hit records, critical and commercial success, and you get today’s Beck, totally in command of his craft, a great singer and songwriter who’s tuneful melodies and edgy lyrics keep him as relevant and entertaining as ever.

In fact, he’s at the top of his game right now with the latest CD, "Morning Phase" of which he played a few songs during the show I was fortunate enough to attend April 10 at the historic Arlington Theatre. If you’re a Beck fan, and by all means, you should be, it’s a mellower collection of songs compared to many of his previous releases.

Over the years, I have tried to decide exactly who it is that inspires Beck. Sometimes his music reminds me of Pink Floyd and other times David Bowie and still other times Bob Dylan.  Beck has that kind of variety with his voice and song writing.

However, despite my affinity for songs by Beck, inexplicably, I had never bought any of his music. In retrospect, I guess it was only a matter of time and after witnessing him do what he does best up close and personal, I bought Beck's new CD, "Morning Phase". I can honestly say this might be his best yet. (Yes, I did my research and listened to most all of his previous CDs).

As for the performance, the Arlington is a perfectly intimate venue for "bonding" with an artist. The sound quality was glorious! Great bass... crisp highs and a full range in between, Beck cares about the little things in his "live" performances as much as he does in his studio offerings.

To say Beck is diverse is an understatement.  The audience was treated to some mellower songs from the album "Sea Change" at the beginning of the show and as the show progressed a colorful variety of styles manifested including folk, soul, funk, hip hop, alternative rock, psychedelia and even a little bit of country.

Overall the show was high-energy and relentlessly entertaining. A wonderful mix of different musical styles weaved their way throughout the night. Usually a band sticks to what they know best but Beck fearlessly mixes genres, always striving for something new and better. Beck was seemingly tireless, always on the move, and in the great spirit of an artist who simply loves to perform. He also covered a wide range of songs from all of his albums so the audience got to hear old time favorites along with new compositions. Accompanied by 5 other band members, Beck sounded complete. After the 3rd or 4th song the audience stood up and then never sat down for the rest of the entire show, dancing, moving, smiling, and grooving to the rhythms and beats.

For those of you who don't know Beck's music, I highly suggest you do what I did. See him live the next time he comes to Santa Barbara. Trust me, you’ll be glad you did.