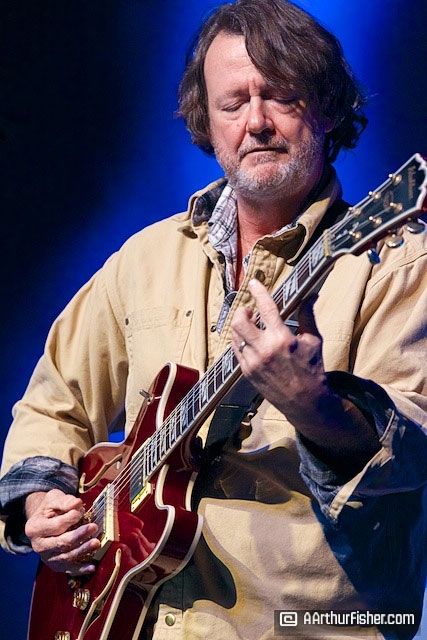 Written by Murray Adams on 28 April 2014 Posted in Event Reviews.

It had been nearly 23 years since my first Widespread Panic show and going on 4 years since my last. In that time period, I probably clocked in more than 70 shows (a relatively modest number for most diehards) that qualifies me safely as one of the devout. I have my prized collection of concert tees, live recordings, and I confess that I even named my dog after the late Panic guitarist, “Mikey” Houser.

However, after my last show in Los Angeles back in 2010, I told myself it would probably be my last. Don’t get me wrong, it was great, but as I looked around my balcony seat that night at the tranced-out, gyrating crowd, I thought that just maybe I had outgrown my love for this band, that I might have moved on to different tastes in music, to a different time in my life.

However, when last Thursday night Widespread Panic showed up in my backyard and at the historic Arlington Theatre, no less, I had to go, if not for old times sake, to just simply have fun and revel in some memories. Sure I have two kids under the age of 2, sure I had to be at work the next morning, sure there was a chance I might wake my wife in the middle of the night with a pizza burning in the oven, but the eight minute walk from my front door to my seat in row 17 was just too easy.

For those who’ve never experienced a Panic show, it is as much about the experience as it is the music. As I walked from my house down to the theater I saw the first signs that a Panic show was brewing. A “WSP” window sticker here, a “Travelin’ Lite” bumper sticker there.

Diehard Panic people are indeed a colorful mix. Most look like they’ve been on a camping trip for 6 weeks, and many of them actually have as they’ve been faithfully following the band across the country. They’re a resourceful bunch too, often trading handmade wares, selling hot food out of the backs of cars, all to help pay for the next ticket to the next show. To any passerby, the vibe is clearly much more Grateful Dead and far less Jack Johnson.

And so began a show including several sets, spanning a couple of hours that left a nearly sold out theatre of some of the band’s most devoted followers, completely satisfied, if not exhausted. While front man John Bell doesn’t even like the term, jam band, that’s exactly what they did. Jam, and then jam some more. The crowd swayed in the warm theater to sounds of the six long time veterans of the music scene. People danced, played air guitars, bopped imaginary bongos and indulged their spirits while escaping whatever troubles might have been on their minds as they walked into the Arlington that evening.

As for me, I had a great time. Life’s a little different for me now and I’ve got responsibilities that I in no way imagined I’d have over two decades ago when I first got hooked on the iconic rock band that hails from the music cradle of Athens, Georgia. However, the sounds of their unique southern rock, blues rock, progressive rock, funk and/or hard rock, still resonate with me and probably always will.

So am I back on the Panic bandwagon? Maybe, maybe not, but I do know that if and when they play Santa Barbara again, I’ll be one of the first in line. Until then, I find solace in knowing JB and the gang are still out there, playing their hearts out for fans old and new. And if I ever need my Panic fix, they’re just a summer tour away.