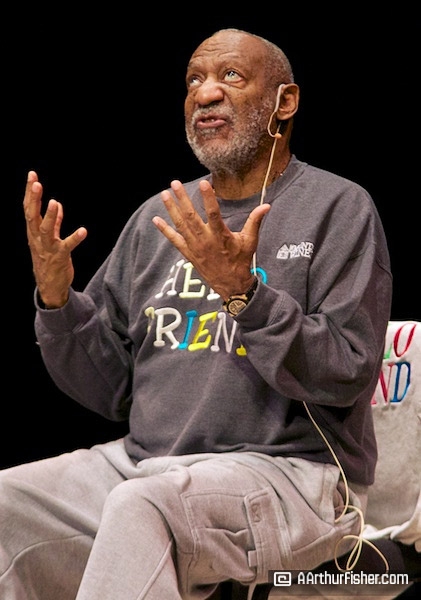 It’s an embarrassment of comedy riches at The Arlington for the latter half of February, with comedian Gabriel Iglesias (two shows) and writer-humorist David Sedaris appearing in coming weeks. Kicking things off, though, was the titan of standup comics, a man whose career spans over a half a century: Bill Cosby.

While Helen of Troy may have possessed a face that launched a thousand ships, the humor of Bill Cosby has launched the careers of tens of thousands of would-be comics. In his recent autobiography, actor-comedian Kevin Pollack recalls himself as a 10 year old lip-synching to an early Cosby comedy record.  “I subconsciously learn pure comedy rhythm when Bill takes a pause, or clears his throat, or takes a breath during one of his stories,” Pollack writes. “Little do I realize how insanely fortunate I am to be conducting said studies at the aural feet of a true master.” As Cosby demonstrated with his charming, extended performance on Sunday afternoon at The Arlington, the 76-year old “true master” still has it.

Long considered the standard-bearer of observational humor, Cosby did not disappoint with this show. The near capacity crowd—many of whom were young parents when Fat Albert and the Electric Company debuted—responded with enthusiasm to Cosby’s riffs on parenting, marriage, sibling rivalry, and Garden of Eden peccadilloes.  When recalling his childhood, Cosby humorously admitted that there were times when he deeply resented the very presence of his younger brother Russell. “I clearly understood Cain,” Cosby intoned after a pregnant pause. The audience roared.

No one ever called the guy edgy—I don’t think Cosby has done a Friar’s Club Roast since the one for Dean Martin in the mid-60’s—and this show was no exception. But his contribution to comedy is beyond dispute. From his standup routine, to his long-running sitcom, to his adorable show “Kids Say the Darndest Things” (which I recall every time I see one of those AT&T “It’s Not Complicated” commercials with comedian Beck Bennett), Cosby’s legacy is secure.

He is certainly not without his critics—and I am not referring to the fashionistas who sneered at those godawful, late-80s Cliff Huxtable dad-sweaters. There are those who suggest that Cosby has not done nearly enough in the way of advocacy or activism as a prominent African-American celebrity comic, and that his “by-the-bootstraps” admonitions to urban black communities fail to account for a number of other, important social factors. There may be merit to such claims, but as Jerry Seinfeld recently said (to no small amount of consternation), comedy has an obligation to be funny, not politically correct. There is brilliance in the Bill Mahers, Jon Stewarts, and Lewis Blacks of the world, sure; but there are times when the public looks to comedy (or entertainment in general) so as to escape the lunacy of frustrating partisan politics, not to be bitterly reminded of it. And that is precisely what Cosby delivered here. Those ugly sweaters will never make the catwalk during Fashion Week, but good heavens, they sure do feel good. Thank you, Mr. Cosby!