Written by A. Arthur Fisher on 19 November 2006 Posted in Event Reviews.

In a very dark theater lit with only a dim spot, Jim James of My Morning Jacket warmed up the crowd with his rootsy-yet-modern folk music. Accompanied by a single musician and a synthesized drum machine, James brought the crowd to full attention for his opener set. The duo was tight, easy going and nonetheless captivating, so one might have heard a pin drop between the beats.

After a short break, John Prine took the stage, amusing the crowd with his bluegrass/country/rock, home-brewed style music and his humorous stories and annecdotes. 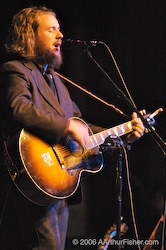 Of my favorite songs was one written about his grandfather, a song which evolved from his memories of time spent with him. The stage and lighting were simple, decorated solely with the performers, a large stand-up bass, a second guitarist and a percussionist. Still, the show was good 'ole entertianment and a pleaser for all who came.