Written by A. Arthur Fisher on 19 November 2006 Posted in Event Reviews.

Former guitarist of Fleetwood Mac brough the crowd to their feet with repeated standing ovations. Playing with his bare fingers-only on his acoustic, shallow-body guitar, Buckingham performed a few songs off his new album Under The Skin and plenty of crowd-pleasing favorites like "Big Love," which started off at a slow tempo but ended in a 70's style jam that led the house into a raging dance party. The master guitar player ended some of the songs by wailing on his axe so hard he stopped just short of smashing it to pieces on the stage. 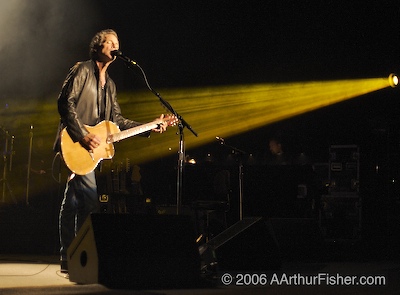 Lindsey was backed by his three-piece band who played acoustic instruments for most of the performance, whipping out their electrics for only a couple songs. The only thing louder than Buckingham's guitar mastery were the crowd's ravenous cheers, which beckoned the band out for two encores and a warm goodbye.