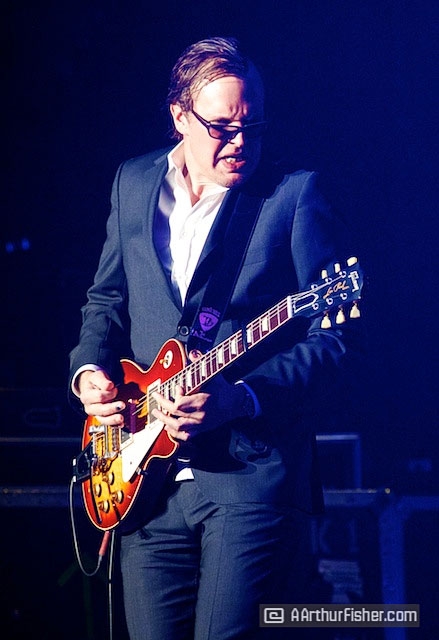 With ears still ringing the next morning, this reviewer can say with confidence that in 30 years of attending shows here more sound has never come from the Arlington’s stage.

But it was a good, clean noise, performed by professionals, not sonic destroying punks with teenage angst. If you like unparalleled guitar work, extended jams and solos, massive drums and fantastical keyboards then this show was for you.

If you don’t, then you would have loved the opening act.

Joe Bonamassa opened for himself. Attired in a fine silk suit sporting his signature shades, he quipped “Hi, I’d like to thank Joe Bonamassa for opening for me.” Sitting center stage in a chair with acoustic guitars all around, his five-piece ensemble of virtuosos on mandola, violin, piano, spoons/washboard and bodhran (if you don’t know what this is, look it up) summoned a family gathering in the heart of Appalachia and the Emerald Isle, between John Henry’s steel driving hammer and Springsteen’s Dublin folk scene.

It was beautiful music. Beginning with Palm Trees, Helicopters and Gasoline, it was an infectious 45 minute opener. Jockey Full of Bourbon and Sweet Jelly Roll indeed rolled on several levels of concurrent rhythm with Bonamassa’s intense vocals and urgent picking calling waywardly out into the night.

Returning from a short intermission he launched into Dust Bowl – a good bridge from the acoustic set to the electric – followed by the incandescent Midnight Blues. Sporting a double neck Gibson, Bonamassa then channeled Jimmy Page for a withering Slow Train. Absolutely withering.

This is when things kicked into high gear…and got hazy. After 10-minute version of Sloe Gin, the mind numbed as the jams added up: The Ballad of John Henry, Blue and Evil (I think) and the rest is clouded by the most amazing hard rock musicianship seen in ages in Santa Barbara. Truly.

Bonamassa’s ability to channel different sounds from a guitar is extraordinary. On a dime those steel loaded riffs pivot away from six strings to a violin that’s crying for a lost love across the windswept Gaelic burren, to, well, a whale calling from the depths (you had to be there, I guess).

The band he’s assembled for this tour consists of pros who’ve played with a ‘who’s who’ list of greats, the likes including Bowie, Richards and Jagger, Clapton, KISS and LL Cool Jay. Bassist Camine Rojas is the most seasoned, and it would be difficult to overestimate his value to the Bonamassa wall of sound; he drives it.

Looking like he’d just walked out of the ‘71 line up of Lynyrd Skynrd, Derek Sherinian handled an amazing array of keyboards for both the acoustic and plugged in sets. Behind the drums was the incomparable Tal Bergman, who’s precision and drum solos came down on just this side of many a dead British rocker. Seriously, watching him play was jaw dropping.

Bonamassa has achieved cult status. The UK’s Guardian said of him: "The 35-year-old from upstate New York has consolidated a reputation as the pre-eminent blues-rock guitarist of his generation."

Bonamassa has long stated that he finds the British version of the blues, fostered by Eric Clapton, Jeff Beck and the Irish blues player Rory Gallagher more to his liking than the original twang of the Mississippi Delta blues players. Still, there’s some Chicago influences in him, he’ll admit, and the King himself, B.B. that is. But his style of playing also incorporates progressive-rock, jazz-rock and increasingly American folk, fusion and funk.

He himself says that he’s no innovator, but rather a fourth generation musician who tackles different genres and makes them his own. He’s modest, as that in fact is innovation.

So it’s no surprise that he is huge in Europe. And while Bonamassa released his tenth studio album in 2012, it’s the live show that counts most with this man. Check out the halls he’s played and made recordings within, the best in the world:
• A New Day Yesterday Live (2002)
• Shepherds Bush Empire (2007)
• Live from Nowhere in Particular (2008)
• Live from the Royal Albert Hall (2009)
• Beacon Theatre: Live from New York (2012)
• An Acoustic Evening at The Vienna Opera House (2013)

The recent Vienna show has perched Bonamassa at a crossroads of his own making; he’s on the verge of gathering a larger audience share…if he wants to. Seen widespread on PBS (of all places) it featured unplugged Joe, and perhaps attracted new but perhaps older or mellower folk-loving fans. They were evident in the crowd Thursday night, but as the electric show forged, slammed and howled forward their white scalps could be seen peeling out, the frontal lobotomy complete for some.

But there were many more admirers. It’s always great to see some 57-year old dude jump up from his seat with joy and r-o-c-k, staring wondrously at the white heat and rainbow lights streaming from the stage.

While the acoustic opening act and the electric follow-thru was novel, one consideration would be to weave the two together, giving an occasional break to the relentless thundering and inserting variety into the 2:15 minute set.

Being that ‘tis the season and all, it was interesting that Bonamassa’s new holiday song Christmas Date Blues wasn’t the closer. It’s a fun one, and available as a free download now on his website.