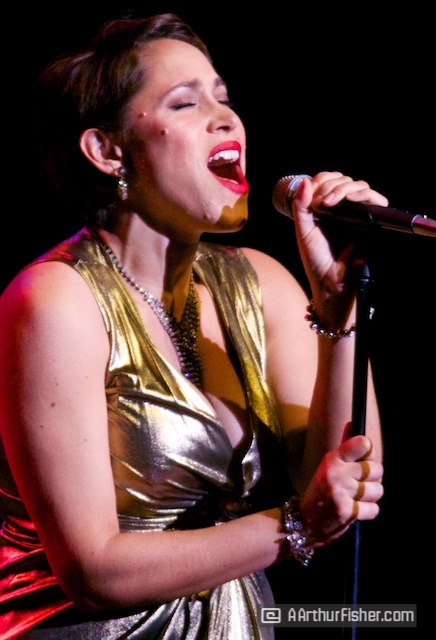 I knew I was in for a real treat as I entered the historic Arlington Theater for last night’s Pink Martini performance, sponsored by one of Santa Barbara’s most valuable local resources, UCSB Arts & Lectures. The tizzy of feather boas, wigs, and sparkly shawls, all in bright pink, was an effervescent sneak peek into the magic of the night’s events.

The smooth jazz playing in the background before the show was sweetly ambient to complement the savory conversations happening all around me as I awaited the performance. “How elegant you look tonight,” I heard one fella tell a female friend before embracing. Pink Martini’s holiday show was rung in quite nicely with Santa Barbara’s first real wintry night of the season. Scarves and big furry coats freckled the audience as we sat in eager anticipation.

Eleven members come onstage for the evening’s show, Ms. Forbes in a dazzling gold dress and diamonds on her ears, wrists, and neck. Her striking red lipstick plays along with the glimmers of her jewelry in the light. The opening song carries with it some fantastic horn solos, swaying hips, and even an audience clap to the rhythm. We fall under the influence of the Pink Martini as the lyrics enchant us, “let forever begin tonight.”

The song intros bring giggles from the audience as several members of the orchestra share their craft and a little bit about the inspiration behind each piece. A piece about German cowboys in a Western saloon scene stems from an old hit called Freddie and the Song of the Prairie. The German language isn’t often described as beautiful with its cacophony of consonants strung together, but Ms. Forbes magically makes it so.

From German to Italian, Croatian, Spanish, Arabic, French and English too, China Forbes’ vocal performance is transcendent in its beauty and majesty. What impresses me most is the lack of music stands onstage. Not only is their sound fluid and seamless, they have no cheat sheets to usher them along. True talent in its most pure form was exemplified last night as these eleven people came together to blow the minds of an audience.

Classic holiday songs like The Little Drummer Boy and Joy to the World are brought to life while bongos tango with strings. Lauderdale’s charismatic skills on the piano are breathtaking while Nicholas Crosa on the violin gives me chills. In Lauderdale’s explanation for why they released a holiday album, he says “for us, Wal-Mart just isn’t an option, so that left us with Starbucks.” A guffaw from the audience followed.

The silly anecdotes preceding each song followed by each captivating performance made for a truly enjoyable evening. The character and energy present amongst this biggest little orchestra in the world are both forces to be reckoned with. I’ve never had so much fun listening to something I don’t understand. China’s voice, sweet like caramel swirling through the theater, and her dazzling beauty, meshed so naturally with the raw talent of the rest of the crew.

Although all shows must come to an end, the audience was reluctant for this truth to be told, as our standing ovation beckoned an encore. The last song of the evening got everyone moving with a massive conga line threading through the theater. Old ladies dancing in pink feather boas with their gentleman companions in sport coats and sweater vests grabbing their hips and swaying along, made for a truly priceless moment where a wrinkle in time was formed. Thank you Pink Martini for letting me disappear into your magical reverie for this chilly December evening. You have truly made a fan out of me.