Written by Jim Youngson on 15 November 2011 Posted in Event Reviews. 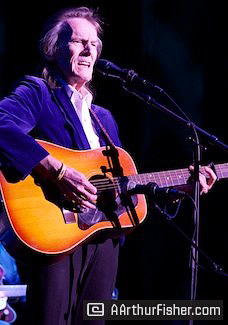 He certainly looked the part:  His was the squint of a man long at sea, back from horizons beyond.  In from the interior, hallowed out features and wild hair, beaten by that relentless northern Canadian wind.  A man wisened up, after years spent in coffee houses and mostly bars, stretching ballads and the whiskey to nearly dawn, with the only nod to the entertainment industry a purple velvet smoking jacket.

It’s a rich but hard life.  And every ounce of it was on display in the form of Gordon Lightfoot last Wednesday night.

Reconciling one’s memories and album covers of favorite artists-in-their-prime with the reality of age is often a stretch (except for Jagger and McCartney…those guys don’t really age, do they?).  But Lightfoot, 72, has struggled in recent years with very serious health issues, and his appearance was a sobering reminder of the mortality facing all of us.  Physically, he his gaunt, inexpressive face and extremely thin frame were alarming.  He moved slow and often drank water in the most deliberate manner.  Still, like the characters that frame his songs, he must be a tough guy….as he’s pretty much looked the same for years.

As Glen Campbell, now suffering from early stage Alzheimer’s, said at a recent Lobero show, “It’s great to be here….in fact, it’s great to anywhere.”  But enough morbid talk.   Gord might be road weary but it’s the first time he’s journeyed thru Santa Barbara in a dozen years. 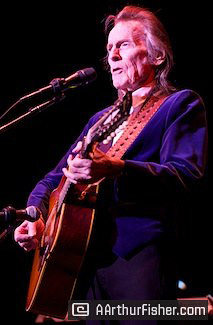 That’s welcome enough for one of the greatest singer/songwriters – and perhaps least appreciated – of the past half century.  The iconic talents that have covered his songs reads like a whose/who of music:  Elvis, Cash, Streisand, Belafonte, today’s Toby Keith and, yes, even Glen Campbell.  Perhaps the ultimate testimony of Lightfoot’s legacy comes from the main bard himself, Bob Dylan, who once observed that when he hears a Lightfoot song he wishes it would last forever.

The Band’s Robby Robertson, himself a Canadian, has called him a “national treasure.”  And, no doubt, he is, having played at the 1988 Olympic Games in Calgary, and received the Companion of the Order of Canada, the country’s highest civilian honor. 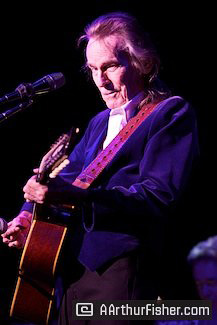 Lightfoot kicked off the evening with melancholy Carefree Highway, a road song of love lost and wanderlust ahead.  It’s no secret that his 60s folk and 70s ballad periods were his pinnacle, so it was a bit disappointing that he followed such hallowed ground with weaker pieces such as Sea of Tranquility, 14 Karat Gold and a Painter Passing Through.  These are not bad songs, but with the library at his disposal it was a shame that remarkable songs went missing from the evening’s two sets, such as Song For A Winter’s Night, Alberta Bound and (gasp) even Early Morning Rain.

Like Dylan’s in reverse, Lightfoot’s voice has changed dramatically over the years.  Once a deep, rich baritone, it’s now a nasal whisper.  For the diehard fan (and there were many at this show, calling out “we love you Gord!”) this comes as no surprise, and is tolerated because the diehard fan knows every lyric.  But to those anticipating the once powerful melodic voice that was music unto itself, the show may have been disappointing. 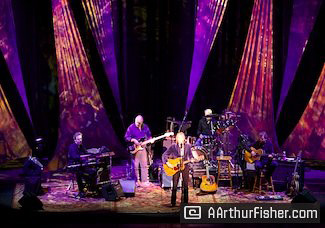 In fact, the band seemed to be holding back so as not to overpower his fragile feather of a sound.  Unlike Sinatra, who could still emote and work a phrase well past his prime, Lightfoot’s voice was flat and stoic, making words hard to understand.  This too may explain the song selection, leaning towards the less ambitious vocals of the past 25 years.  Of course, some ballads worked fine:  Beautiful, Spanish Moss and Restless (a fine later day song). 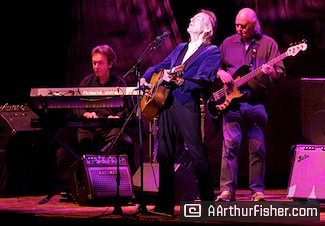 And when the talented and underutilized band was allowed to briefly kick it up, the crowd was willing and eager for more.  Sundown…Ribbon of Darkness...Old Dan’s Records…sadly, these were but glimpses of what could have been.

Of course, some tunes sans voice lead lives of their own, regardless of voice or sound production.  Lightfoot can claim many, but two highlighted and arguably carried the entire show.  First up was the true story of a modern-day Flying Dutchman – The Wreck Of The Edmund Fitzgerald – a tanker with 26 souls lost in Lake Superior in 1975.  It’s captivating, and you feel the loss of each man as if you were there.  To his credit Lightfoot has never cashed in commercially on this song, other than on the original vinyl. 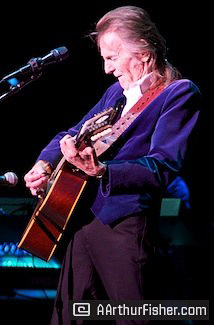 And finally there’s Canadian Railroad Trilogy where Gord pulled out his 12-string for the only time of the night.  A treat indeed.  This is a song about the frontier spirit, and the “deep, dark forest too silent to be real.”  His imagery puts you in a place, a time and a spirit for adventure and restlessness, longing and regret, love and walking away.

If you don’t know Gordon Lightfoot’s music except from this show, don’t lose heart.  Mine the catalogue.  Sit back, close your eyes and listen to Steel Rail Blues and Highway Songs.  You’ll be addicted for life.  And if you don’t fall for the tale of despair told in Early Morning Rain, well...you just don’t like Gordon Lightfoot.