Written by David Palermo on 28 October 2011 Posted in Event Reviews. 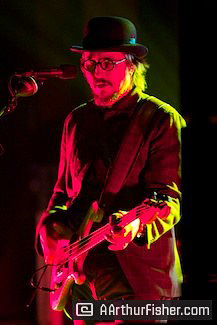 I was called to review "Primus".  I had never seen Primus but have always thought the name was a strange one for a rock band.  I decided to look "Primus" up in the Apple Macintosh on-board dictionary.  According to it, "Primus" means, "a brand of portable cooking stove that burns vaporized oil".   Ummm…. ok moving right along...

Further research revealed that Primus was actually called "Primate" back in 1984 when they started.  Another band already had a similar name, "The Primates" so Primate was changed to Primus early on in the bands career, which at last count has been around 27 years.  Not bad at all.  I wonder what happened to "The Primates"…  maybe the name didn't help them? 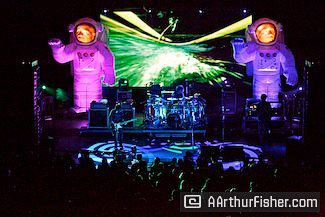 Anyway, Primus is kicking off a tour for their new album, "GREEN Naugahyde". The show began at 8:30 pm with no opening band.  On either side of the stage stood tall inflatable astronauts with a face projection in the helmets that looked similar to Buzz Aldrin.  This face looked around seemingly curious about his surroundings… as if he were on another planet.  In between both astronauts was a screen in which animation played.   The stage was as interesting as the music. 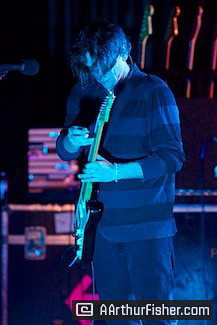 I didn't know what to expect not having ever seen Primus and to tell you the truth I didn't expect to like their music.  I don't know why, really.  There are 3 members to Primus.  Lead singer and bass player, Les Claypool.  Guitarist, Larry LaLonde, and drummer Jay Lane.  Claypool plays a bass like no other.  Chris Squire of Yes comes to mind.  They both have different styles but are amazing to watch.  It's interesting when a bass becomes the lead instrument.  On his bass, Claypool mixes tapping, flamenco-like strumming, whammy bar bends (unusual on a bass guitar) and slapping.  It's something to see (and hear)!  The guy is amazing.

The sound produced by these 3 is amazingly tight and full.  Most of their music is very rythmic and if I had to describe their sound I 'd say they sound close to early Pink Floyd - without a keyboard.   Floyd's "Meddle" album comes to mind.  The track "One of These Days" in particular.  Their music is original and entertaining… Normally lengthy songs get tiring.  Not so with Primus.  Their music definitely has a beginning, middle and ending.  It's all good stuff. 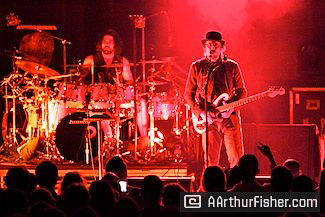 They played for about 2 hours then took a short 15 minute break while Popeye cartoons played on the screen.  Odd but interesting...

After the break they played another full set.  I didn't get tired of this band and though I couldn't make out all the words to many songs Claypool was lively and entertaining and had a kind of "Johnny Depp" look and quirkiness to him.  Again, it was amazing to watch him play the bass.  The other members were great as well but Claypool's unusual bass playing really stood out. 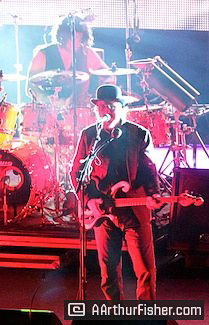 The audience consisted of young and old.  I was surprised to see the diversity there.  I expected to see only die-hard Primus fans (older) but there were some young kids in attendance also.  Most of the audience stood during the entire show.  A sure sign they were enjoying the music.