Written by David Palermo on 18 October 2011 Posted in Event Reviews. 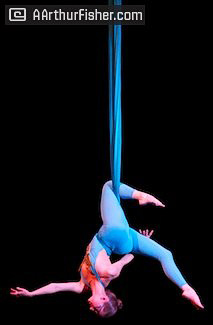 I dream of flying a lot in my sleep.  These dreams are usually so vivid that I can actually feel the wind on my face and my body can feel the lightness as gravity falls away as I ascend into the sky.

I even have to be aware of power lines and other obstacles!    Upon awaking the memories of flying seemed so real. Some of you know the experience I am talking about.  In Cirque Wings one can almost get so involved in the show that time passes and more than 2 hours have passed and we hardly noticed.

Cirque Wings is a show that takes place in the "air".   It's all about flying.   The performers do their amazing thing high in the air…  they do incredibly elegant  things that require great strength with their bodies while beautiful music surounds them and the  audience.  I wouldn't call it a dance show, or a ballet really,  but there are elements of both throughout. 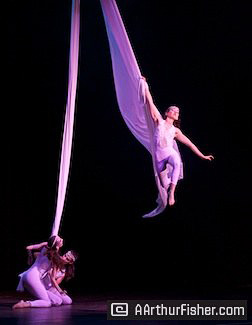 The show is a combination of dance, extreme acrobatics, beauty, and physical strength.  It could best be compared to Cirque Du Soleil only on a much smaller and intimate scale.  There are also a few performers in Cirque Wings  that used to perform for Cirque Du Soleil and you can see the similarities in the amazing ways they can move their bodies.

The cast consisted of about 20 members ranging in age from about 10 on up.  The show was directed by Ivo Gueorguiev, a native Bulgarian and former Cirque Du Soleil performer.  Also directing and performing was his partner Jill Hansen. I also want to point out that there were local performers from the Santa Barbara Gymnastics Club. 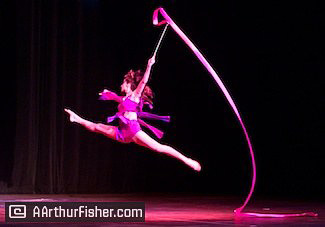 The show started with 2 humorous "flight attendants" taking the audience on a make believe flight on an airline… they directed us to take our seats, stow our luggage etc…,  just like on a real airplane…  Their expressions were hilarious.  I don't want to give it all away but after this part of the performance the "flying" begins…  and through dance and physical magic we are taken to a  world,  in the air, of acrobatic delight. 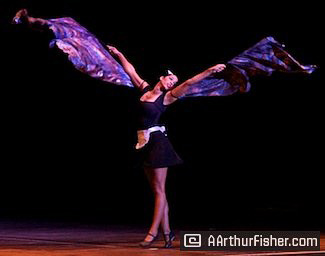 (How's that for a  description???).    Seriously, the physical grace and talent these  performers have is incredible.  And to do what they do high above a  stage without a safety-net is breath-taking.  I will let the accompanying photographs show you some of what I mean.  It takes  years to do what these performers do. 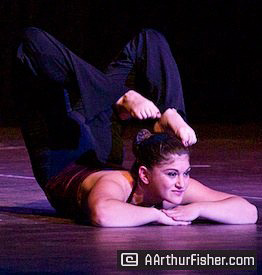 There were two performances… one in the late afternoon and one later  in the evening.  I went to dinner before the evening show and  happened to see The Arlington emptying out after the first show.   Lots of people were leave and they all had very happy faces.  There  were a lot of children filing out so I payed particularly close  attention to their expressions.  When children come out of a show   smiling, I think it's  a good indication that the show of this type  is probably pretty good.  I was right.  ; )

The evening performance I attended had fewer children but it looked  like everyone enjoyed it. 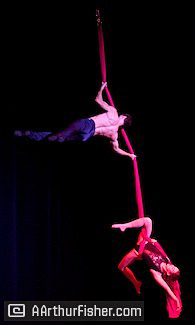 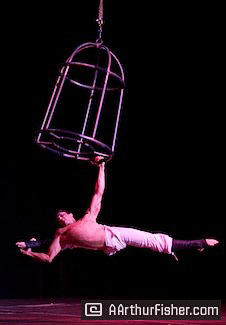 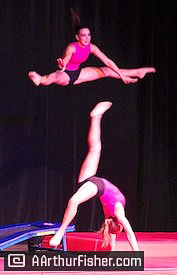 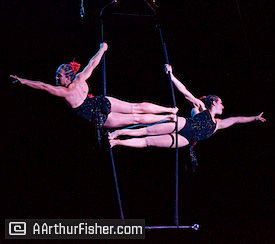 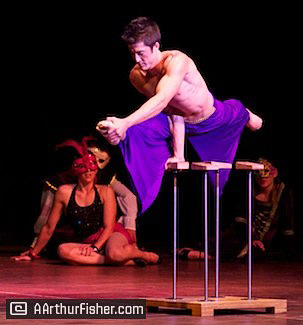