Written by Rosminah Brown on 18 June 2011 Posted in Event Reviews. 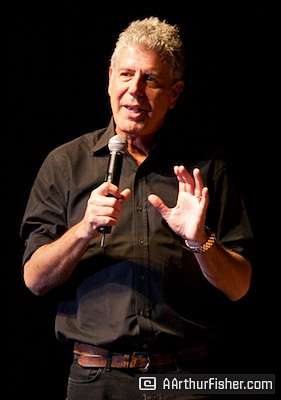 Celebrated food writer and television personality Anthony Bourdain paired up with friend and fellow celebrity chef Eric Ripert on Sunday for an afternoon of foodie nirvana at The Arlington Theatre as part of UCSB’s Arts & Lectures series.

The audience was filled with local chefs, enthusiastic cooks and many people of the food and restaurant industry, and the theater seemed near capacity. And no wonder — these two men exude so much passion for food, yet their personalities are diverse enough that anyone attending found a voice to resonate with, even when the f-bombs started dropping a few minutes into the talk.

The event kicked off with Bourdain standing over Ripert, grilling him with questions about his “suspicious” French connections and accent in a Homeland Security-style interview, hinting that Ripert was unpatriotic before finally bursting out with a smirk, “Why do you hate America?” The tables turned when Ripert became the interrogator, with his first question to Bourdain: “Have you ever worked in a restaurant for more than a day?” The answer: no. But both men were clearly spokesmen of the industry, with bestselling books, popular television series and devoted fan bases to their credit.

The second part of the event had the two sitting side by side, discussing current food trends and presenting hypothetical — and funny — questions to each other, such as: Which would Bourdain prefer for his daughter’s wedding — Sandra Lee’s food or McDonald’s? Answer: McDonald’s French fries. Poor Lee couldn’t get a break. She got ripped on several times for her Semi-Homemade Cooking television show.

Bourdain took another hit when Ripert informed the audience that every competitor on Top Chef was a better cook than he, and Bourdain agreed. They both addressed the question of what they would do if presented with the last bluefin tuna in the world, as it is a delicious but endangered fish. Bourdain confessed he would eat it. Ripert, with stronger convictions, said he would not, and as a Buddhist suggested that Bourdain most likely would be reincarnated as that last bluefin.

What would Ripert prefer: eating a whole McDonald’s Big Mac or chugging half a bottle of top-shelf tequila at once? Answer: He would chug the whole bottle of tequila before eating a Big Mac. 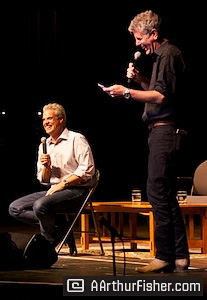 On a slightly more serious note, Ripert addressed the fad of molecular gastronomy, a food trend this reviewer has experienced and considered a worthy meal to try once — but likened to the height of Roman decadence, with an empty sense of circus-like gluttony afterward and not to be repeated. Ripert declared that molecular gastronomy was dead, that there was now a backlash of the word to the point it is considered bad. He said foodism and fine dining is becoming more democratized and no longer just for the elite, and the prices of meals vary because the experience varies. Good food is available to us when we want it. The audience had much applause for this.

Finally, the duo took questions from the audience. One standout was a query for their opinion of the popular television show Man vs. Food where the host goes on a food competition circuit to see if he can eat restaurants’ massive pre-set meals to “win” usually a T-shirt, a free meal and the admiration of viewers. Was this man killing himself on television in the name of entertainment, or was this mere fun in the name of entertainment? Both men wholeheartedly agreed the show was not healthy, not just for the host who would clearly show signs of agony while overeating, but it sent a distasteful message to the world on America’s overindulgence and wastefulness when viewed in Third World countries on satellite.

Someone asked where the two men would go for their last meal, locally. Bourdain strayed farther afield by firmly stating the Chateau Marmont in Hollywood (I believe he meant the Bar Marmont, as the chateau is the hotel portion, and he is right — it is very good), and Ripert said he would prefer to buy some good bread, some good cheese, some good wine and dine out on one of the beautiful local beaches. At this point, the women of the audience collectively sighed in happiness and everyone cheered.

When asked which Santa Barbara bar was the spot to hit for the drink, the answer was the Sportsman. For food, Bourdain was hesitant to name one, only for the sake that it would now be overrun with business, but we all knew the answer and someone finally shouted, “Julienne!” Just like last year.

A woman asked if Bourdain would do a show on the food and wine of the Central Coast. He responded that wine is delicious, but on television appears as a glass of red liquid over and over again.

These two dynamic and inspiring men on stage encouraging everyone to follow their passions was a great event. Bravo, Arts & Lectures!