Written by Natalie Zimmerman on 09 May 2011 Posted in Event Reviews.

An Evening with Eric Schmidt and Fareed Zakaria 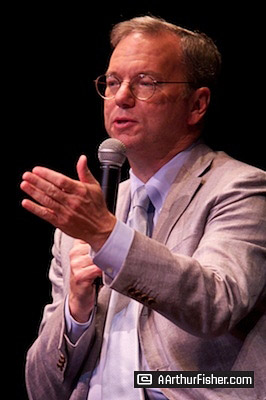 There’s no denying the power of Google.  As a friend told me last week, getting a job at Google is like getting into an Ivy League school.  It could take up to six months for the hiring process, as they choose only the best of the best.  Whether or not this is true, there is a prestige to the corporation because it is the most used search engine.  Just Google it.

The driving horse that brought the company to the global virtual playing field was Eric Schmit, Google CEO from 2001-2011.  Monday night at the Arlington Theatre, Schmit was joined on stage by Fareed Zakaria, CNN host and author, in a discussion about how the Internet and social media have changed government, and their predictions about the future of technology.  The two men were given a warm playful welcome by UCSB Professor Peter Rupert, who introduced Schmit as the “daddy” for the two young whippersnappers who started Google, and Zakaria, as a news broadcaster who has interviewed Tina Fey for an hour.  A funny, yet politically charged introduction that set the mood for the evening. 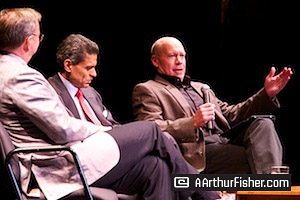 Given the events of the last few weeks, months, and even years, it is important to address how the Internet and social media have helped broadcast these world-shaping events.  With the help of Youtube, Facebook, and Twitter, people are now receiving world event news in real time, and it is being filtered through the Internet’s biggest search engine, Google.  With this as the premise, the conversation was first brought to the most current event, the take down of Bin Laden.  Zakaria jumped in first, stating that it is a devastating blow to Al Qaeda.  But Zakaria didn’t stay long on the subject before he moved into the “Arab Spring,” and the current political non-violent, non-Islamic demonstrations being made by the people in the Middle East, all of which goes against Al Qaeda’s identity.  Bringing it back to the correlation with social media, Schmit commented that the “Arab Spring” should be credited to the people, not social media sites.  Those are just the tools that enabled them to reach out and let their voices be heard on a broader scale. Zakaria tend to disagree.  There needs to be some credit given to technology, not just the people.  In Egypt they could only watch state television, now with satellite television they can see what’s going on around the world.  Along with the Internet and social media, it is all helping empower the people living under weak governments. 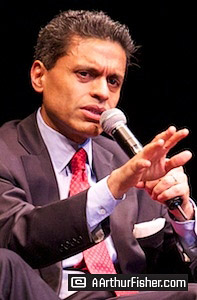 The conversation now moved from events of the last weeks, to that of the last few months.  With technology you can now take pictures and videos on your phone of suppression and unhappiness, of someone being mistreated, and upload on the Internet in real time.  The people in the Middle East can now publicize what is going on in their country.  But as Schmit said, the people have the appearance of these freedoms, through the use of technology, but they are not really free.  The government can use these same technological tools to send a mass text propaganda.  As in western democracy, the most important thing is individual liberty.  Zakaria brings the conversation to the upcoming election in Egypt, and asks Schmit how social media will play a part in shaping the outcome.  Schmit’s answer was optimistic.  The youth has the ability to use these tools.  This generation is more socially inclined; they work better collaboratively, and have a greater more complex set of problems to deal with.

Thus, bringing the conversation to the future of the youth.  What does the future of technology look like?  How will it shape political campaigns?  And further more, how will it change society and social human interaction? 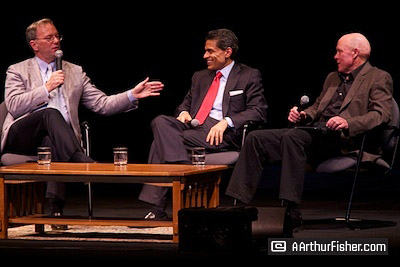 Schmit predicted that in the next 10-15 years we will be receiving information purely on electronic devices, monetized with subscriptions.  Knowledgeable in the subject of journalism, Zakaria predicted that collective brands, such as newspapers and magazines, will be geared towards the reader’s interest.  It will be given to you based on how you like the information.  The downfall, according to Schmit, is the loss of community investigation, which has been the core of journalism.  Small communities will be affected the most, because those reporters will be harder to hear and harder to account for on a monetary basis.  With specialized information based on the readers interested, the real problem is not going to be figuring out how to get local voices heard, but how to get those readers interested in something else.  Everyone will be so engulfed in his or her own specialized immediate subject matter, they won’t have time to obtain inspiration from other pathways.  There will be no broad knowledge. 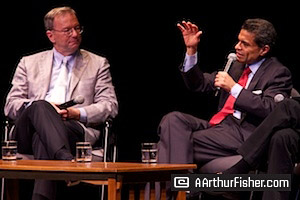 Schmit continued to predict that countries without a voice, will be heard in the next few years because of technology and most importantly smart phones.  There will be eight hundred million to one billion smart phones over the next few years.  As access and purchase power of smart phones continue to grow, the prices will drop to the one hundred, and then the fifty dollar range, further allowing more people to have worldwide access to information.  With the future being that of unlimited access to everyone, even those in poor underdeveloped countries, it is hard not to think about what this will do for middle class society.  Billions of people around the world will be raised up to a new class level, based on the information that they will be able to send and receive.  This is one of America’s world goals, to elevate people to a higher standard of living on a global scale.  But, as everyone else is moving up, what is America doing on a national level?  And that is the question that was posed next. 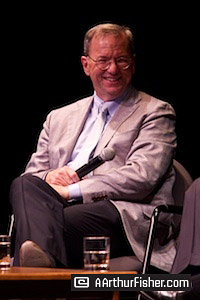 Although Schmit laughed about bringing all the smart people of the world to America and keeping them here by stapling a green card to their diploma, he was serious.  We need to work with our immigration policy.  Graduate students are coming to the U.S., and want to stay here, but instead are getting their education and leaving.  They are going back home, or to other countries and creating jobs and expanding markets there.  Zakaria agreed, particularly with China.  China will move up the value chain not with just manufacturing, but education, especially in science and technology.  America is facing a huge problem with moving up the value chain.  This is something that Schmit and Zakaria both high agreed upon.  America isn’t using its resources at the educational level.  Schmit suggests we concentrate on what we are doing.  America needs to figure out how to grow wealth and make everything bigger in America.  If we embrace that concept, we will be happier and will be creating a more peaceful world.  Zakaria closed the conversation topic with an insightful thought, we are globalizing the world, but we are forgetting along the way to globalize ourselves. 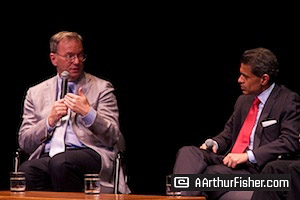 Eric Schmit believes that there are two main global threats, nuclear perforation, by using technology for evil, and climate change, which he believes to be anthropologic.  Conversation in the world should be about those things, Schmit said, especially if we are concerned about sustaining life and a higher quality of life for more people.  Schmit suggested that we develop a new fuel system and energy infrastructure, in modeling after China’s forced pollution control.  But of course a dictatorship like China would have a forced pollution control.  An advancement non-the less, it is still being forced on a huge population of people.  Just as Zakaria stated, they’re using massive government control to enforce this.

Schmit did not go into his thoughts on nuclear perforation, but over the course of the conversation he made it very clear that if technology gets in the wrong hands it can be used for a greater evil.  That is why at Google, they do not sell user information to the government.  If they made the shift to sell the information for political lease, it would be going over to the evil side.  Schmit reaffirmed the audience that Google is built on trust.  Although those are the ideals that Schmit has helped infiltrate in the Google business model, it does not mean that once he is gone (as of this year he is no longer the CEO), this value will remain constant.  As people around the world gain technological knowledge, the possibilities are infinite, and that can be used for both good and evil. 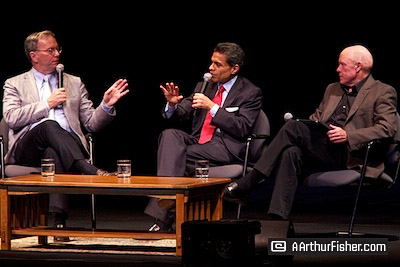 At the end of the stimulating conversation, both men were asked to make a concluding remark.  Zakaria’s final thought was that information technology is streamlining every aspect of a country.  We’ve never had a change this great with this amount of seismic shock.  Schmit’s conclusion: the country needs to work on advanced manufacturing, new energy, and keeping the smart people here.  A little tongue in check, but true.  By a prompt from Professor Rupert to end on a positive note, Schmit ended the two-hour conversation by stating that humans are social, creative and fun beings.  It’s good to be a human when you have all this stuff to help you out.  Everyone wants the same thing, more opportunity and a better life, and all of these people are coming online.  We should embrace that.