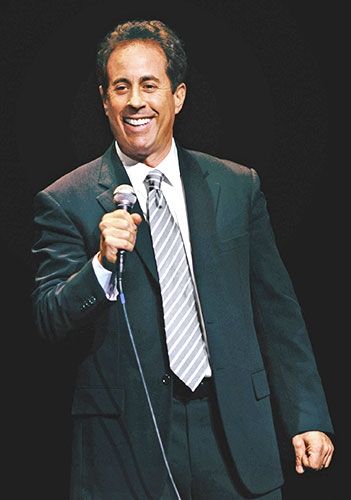 Written by Haig Fisher on 24 April 2011 Posted in Event Reviews.

Jerry Seinfeld is clearly the most successful and influential comedian of his generation and Santa Barbara received a special treat as he made one of his tour stops our very own Arlington Theater.

As the patrons entered the sold out theater to Frank Sinatra songs on the PA system, I could sense this was going to be a special night.  The stage consisted of only a microphone and a stool with a glass of water on it.  After all, what else does a stand up comedian need?

Seinfeld, who had very few missteps along his career, got his first break appearing on the Johnny Carson show in 1981.  He impressed Carson and his audience so much that he was asked to appear several more times.

This led himself and friend, Larry David, to co-create "Seinfeld" in 1990 which aired through 1998.  In this series, Seinfeld plays a caricature of himself and is easily debated as the most successful sitcom in the history of television.

There is very little gray area in the world of stand-up comedy.  You either “bomb” or you “kill.”  You are on stage with no musicians, no back up singers, no anything.  It’s just you, your jokes, your delivery, and the audience.

So, what was the outcome of Jerry Seinfeld’s performance at the Arlington Theater last Friday night?  He nailed it!

Seinfeld performed mostly new material still within his style of joking about observational occurrences of everyday life.  When watching his flawless delivery, it’s impressive he does his act with no notes, cue cards, or help in any fashion.  He delivered one joke after another and the people sitting in the last rows laughed as much as the people sitting in the first rows.

80 minutes later, he left the stage to rousing cheers, only to return right away with his Q & A encore.  Here is where Seinfeld's improvisational genius shines as he had no idea the questions coming from the audience.  One person asked if he was still a Mets fan.  Someone wanted him to comment on a spoon falling into a soup bowl.  And someone asked him to do his milk carton expiration date bit.  Seinfeld responded to each quirky question or request with great poise and delivery.

Opening up for Seinfeld was his good friend, Mario Joyner.  A very talented and funny comedian in his own right, Joyner got the crowd primed with an entertaining and clever set of his very own.

Througout the course of Seinfeld's performance, I couldn't help noticing a couple of hearing impaired guests sitting off to the side in the very first row.  I found myself watching their reactions to many of Seinfeld's antics. With their sign language aides “signing” every joke and sentence, they were all laughing as much as everyone else.