Written by David Palermo on 29 March 2011 Posted in Event Reviews.

David Crosby and Graham Nash rocked the house Sunday night with old favorites as well as some new material.  The two legendary singers, minus Steven Stills, performed along with band-members Dean Parks on guitar, James Raymond on keyboards, Kevin McCormick on bass, and Steve DiStanislao on drums.  (According to David Crosby in a recent Rolling Stone article, Steven Stills is not currently performing with Crosby and Nash because he'll be on tour with Buffalo Springfield later this year).

Not quite sold out, The Arlington made for an intimate setting for the lush sounds and sometimes rather "dissonance" melodies they are known for. 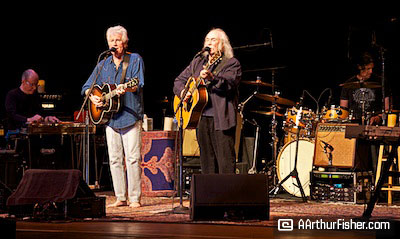 But the dissonance often gives way to beautiful harmonies which, along with strong, and sometimes very political lyrics, has worked well during the 40 or so years these guys have been creating music. 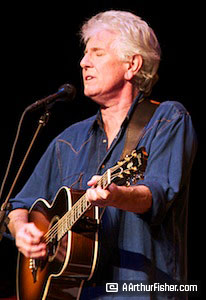 Starting just after 8:00PM with "Marrakesh Express" they played the first 10 or so songs and then had a short 15 minute intermission where the mainly older crowd herded to the bar to refuel before the 2nd set.  There was a lot of enthusiasm for this kind of music for many people because of these interesting times in the world.  Crosby and Nash speak their opinions through their music as well as directly to the audience.  Having been on the music scene for so long it's not surprising that they have little to lose by speaking out against certain political issues.  Whether you agree or disagree with them it's to be expected from these guys.  But sometimes that just rock and roll for you!  Controversial, raw, and thought-provoking!

Mixed with familiar songs such as "Marrakesh Express", "Wasted on the Way", "Long Time Gone", "Wooden Ships",  "Just a Song Before I go", and "Guinnevere" (whom Crosby dedicated to his wife Jan), some new songs were introduced;  "Slice Of Time", and "Camera".   If these two new songs are examples of more new music to come, then Crosby and Nash may make some new fans!  Like they need more ;)

Overall Crosby and Nash seemed perfectly at home on stage and very relaxed.  Of course that's what we'd expect!  Having played at Woodstock 40+ years ago in front of hundreds of thousands of people playing at The Arlington tonight must have seemed like playing in someone's living room! 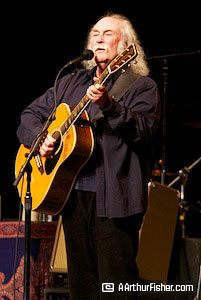 It was nice to see the respect Crosby and Nash paid to their fellow band members.  Guitarist Dean Parks did a number of amazing solos.  He is best known perhaps for his numerous contributions to Steely Dan albums.  James Raymond (David Crosby's son), also had some amazing solo moments on the keyboard.

This band played well together and it was obvious to the somewhat calm audience.  I think many people were thinking that the show would only consist of David Crosby and Graham Nash with a few guitars, which wouldn't have been a bad thing at all but Santa Barbara likes to rock and we like our music loud!  We were not disappointed.

After intermission they came back and played another set of 10 or so songs starting out with many people's favorite, "Our House".  That was followed by an amazing performance of "Guinnevere". Crosby remarked that they never play that song the same... "not because we are great jazz musicians but because we never remember how we played it last." 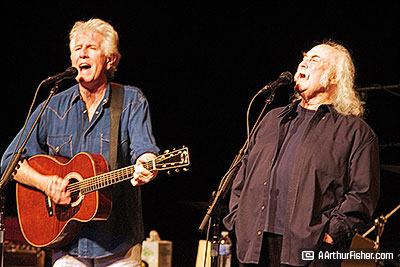 The show ended at around 10:30 with "Wooden Ships" and "Teach Your Children" during the double encores. The song list was well balanced with a nice mix of mellow songs as well as some old classics, which for some reason sounded refreshingly new.

Also, the sound quality was superb... I asked a few people what they thought and everyone enjoyed this show.  It simply was thought-provoking, great sounding music, performed as well as you might expect from such seasoned musicians.  What more could one ask? 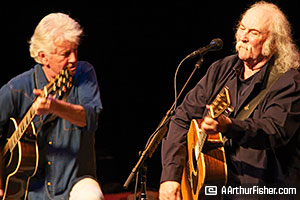