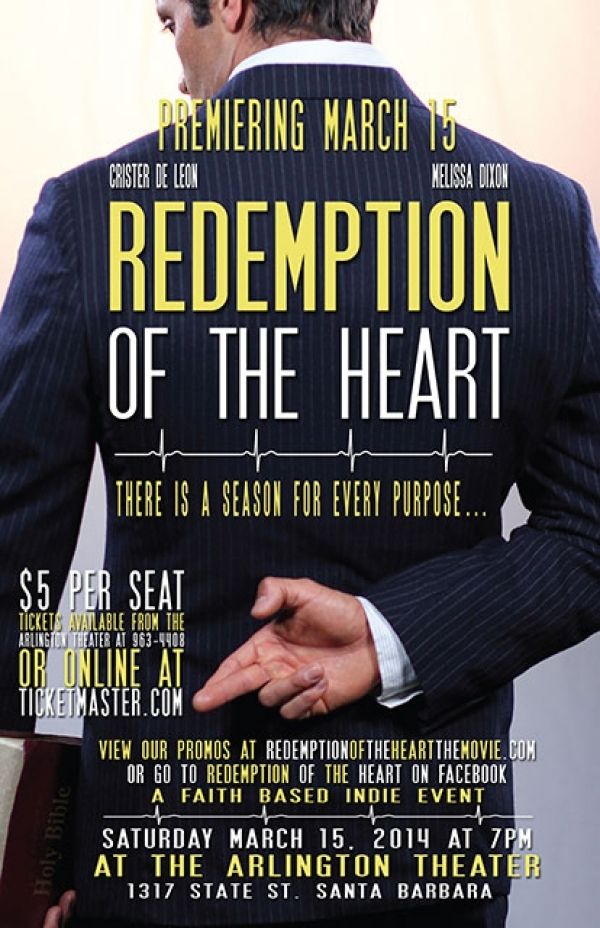 SANTA BARBARA FILMMAKERS TO PREMIERE REDEMPTION OF THE HEART AT THE ARLINGTON THEATER, MARCH 15

Local filmmakers Isaac Meeks and Sandon Yahn, founders of Road Less Traveled Pictures, will premiere their first full-length feature film Redemption of the Heart, at the Arlington Theater. The red carpet event will be held on Saturday, at 7pm PT. Tickets are available online at http://redemptionoftheheartthemovie.com/ for $5 each, in hopes to attract people of all ages.

“Santa Barbara is where the concept for this project originated and the film was written around, not to mention the lead actor and most of the cast are from this city,” says Yahn. “It only makes sense to have the premiere here in Santa Barbara.”

The faith-based film tells the story of Alex a man who has walked away from his Christian faith, but is unable to walk away from his painful past. Suffering from a heart disorder, Alex is in major debt from medical bills and is trying to make something of his life. His friend Daniel, who suffers from a gambling addiction, pulls Alex into his illegal get-rich-quick schemes. Living a double life and with the FBI closing in on him, Alex will be faced with a choice that could cost him everything. He soon meets a wise man that offers him a second chance: to lose his life in order to gain a new one.

Meeks and Yahn both served as the writer, director, producer and editor on the inspirational film and shot the 110-minute movie in its entirety throughout Santa Barbara. It was through the relationship of the lead actor, Crister De Leon, another Santa Barbara resident, helped connect the filmmakers to several of the cast including the romantic lead, Melissa Dixon.

Inspired from a scene in the Award-winning film Les Miserables and stories he heard growing up, Meeks wanted to share a positive message of hope and redemption.

“The theme of an underdog never being too far gone to get help is what inspires me the most,” says Meeks. “I know what it’s like to have a second chance, even when I felt I didn’t deserve it, and that has really made a profound change in my life. I want to share that story with others.”

Meeks had a passion for creating films since he was a small child. After graduating from Brooks Institute of Photography with a B.A. degree in Film & Video Production, he worked with various production companies, producing and directing short films and documentaries. Meeks currently has his own freelance production company, The SB Video Crew that specializes in wedding, instructional and documentary videos.

Yahn’s desire for filmmaking began when he studied film production at Orange Coast College in Costa Mesa. After producing several student films, Yahn moved to Los Angeles and focused his attention on screenwriting. The opportunity to work in the field of video production presented itself in 2008, when Yahn was responsible for producing many of the promotional videos as well as in-house slide shows for Pacific Camps Family Resources Inc. In 2010, Yahn was hired as the head of the video ministry at Calvary Chapel Oxnard, which is where he is currently employed.

Redemption of the Heart will be released on DVD in and distributed by the Christiano Film Group.

For more information about Redemption of the Heart, please visit www.redemptionoftheheartthemovie.com.

### About Road Less Traveled:
In 2008, Isaac Meeks and Sandon Yahn formed a friendship through working together in each other's video ministry at each of their churches. They quickly discovered that they both shared the vision and desire to make independent Christian films and saw the opportunity for the independent filmmaker to produce quality feature length movies with less cost. In 2009, a business partnership between Isaac and Sandon was formed under the name Meeks Media HD Productions. The first production that was green-lit was a short film called “The Road Less Traveled,” but production was put on hold due to budget constraints. Isaac and Sandon realized they needed a story concept that would be inexpensive to film and have locations that are easily accessible. In 2010, inspired by a short story, Isaac came up with a film idea that was originally going to be a short film, it soon developed into a feature length movie entitled “Redemption of the Heart.” During post-production, Isaac and Sandon agreed on changing the production company's name to Road Less Traveled Pictures. They see it as a testament to the journey they both have been on since that day they met and God put on their hearts to make a film...taking the road less traveled to get it done. “Redemption of the Heart” is set to release on DVD in October 2014